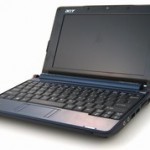 Recently I picked up an older model Acer Aspire One Netbook. While I wouldn’t recommend this as your main laptop computer it is great for taking on the road weighing less than 3lbs. Â Since this was a close out model with a slow Solid State Drive and an 8.9″ screen, it Â is not the fastest Netbook on the market, but at a $199 it was the cheapest. Â This speed issue is mostly due to the slow write speed of the SSD, the rest of the Netbook is up to par with 1GB of RAM and an Intel Atom processor.Â

Since this is one of the lowest models of the Aspire with no HDD it came with a striped down version of Linux called Linpus and since I am a Windows Guy I needed to find a way to install XP. Â I ended up watching this YouTube VideoÂ http://www.youtube.com/watch?v=2Vt_8p0VllY, this was necessary because the Aspire lacks both a floppy drive and a CD drive. Â After a couple trial runs I had eventually installed XP successfully. Â Windows XP actually needs some tuning in order to run on this machine.

The first thing I did was disable the Windows Paging file, then install Google Chrome as the default browser. Â Chrome is based on Apple’s Safari browser and is faster than both Microsoft IE and the aging Firefox browser. Â I also installed Avast for anti-virus and Open Office instead of Microsoft Office. I didn’t do a trimmed down install of XP because I didn’t feel it necesary with the extra 16GB SD card I installed.

Since I use this Netbook for remote connection and diagnostic purposes I want to keep it free of the desktop software, and so far this has worked for me. Â Newer versions of the Aspire have adequate hard disk drives and a larger screen that resolve most of the problems. Â I would suggest anyone who has larger fingers to purchase a Dell or HP Netbook which have a larger keyboard and come with XP Home. Â All of these machines provide 2.5-3.0 hours battery life with standard 3 cell batteries and up to 10 hours with a 9 cell.

While Apple has been resisting releasing a Netbook for the low end laptop market, word is that one will be out this summer. Â Currently Apple’s Air Book isn’t really considered a Netbook due to its pricing. Â You should be able to find a good Netbook deal online, as of this writing for $199-$349. Â Since a lowend laptop can be bought for just shy of $500 I would recommend seeing if you can live with some of the short comings of a Netbook before purchasing one.